Part 1: Control and Associates under Rule 6(1)

Fundamental rule 6(1) was formulated with a view to possible avoidance strategies as found in local and overseas practice. Of particular significance in this regard are the control limb of rule 6(1), the aggregation of associates’ holding under rule 6(1)(a), as well as the definitions of control and associates. 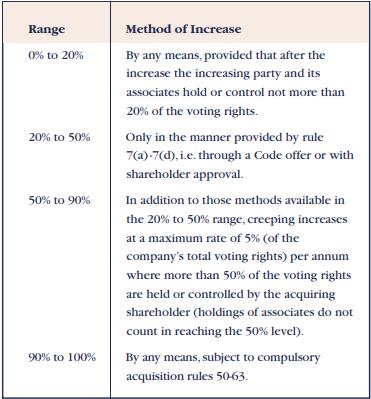 The fundamental rule is concerned with transactions that cause a person to become the holder or controller of an increased percentage of the voting rights in a Code company. If the fundamental rule were triggered solely by changes in a person’s holding, this could be easily avoided by property-based arrangements (e.g. by using nominees) or contractual ones (e.g. by voting agreements). Accordingly, the control limb of rule 6(1) is appropriately viewed as the threshold anti-avoidance measure. It ensures that changes in control of a Code company cannot be hidden behind ownership or contractual arrangements. 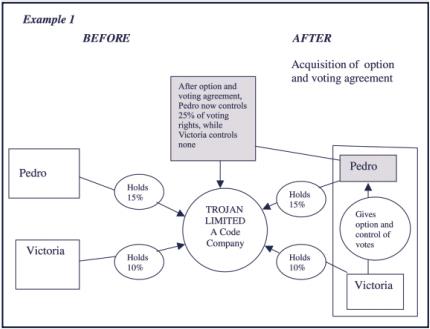 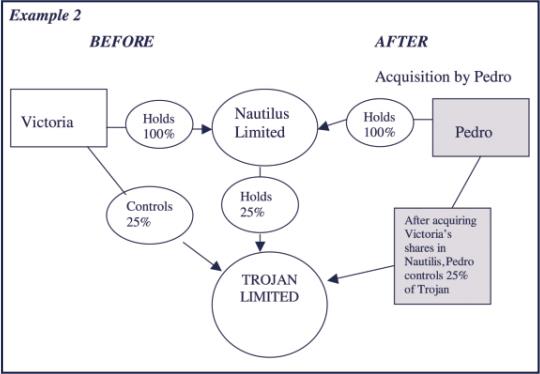 The net cast by the control limb of fundamental rule 6(1) is a wide one, as rule 2(1) defines control, in relation to a voting right, as having directly or indirectly, effective control of the voting right.

Assume, for the purposes of the example, that Nautilus Limited’s shareholders will approve Pedro’s purchase of Victoria’s holding in Nautilus Limited pursuant to rule 7(c). Now consider the proposed transaction as it bears upon the holding and controlling of shares in Trojan Limited. The transaction will not increase the percentage of voting rights that Pedro holds in Trojan Limited. Both before and after the transaction, Pedro will hold no voting rights in that Code company.

However, assuming that Victoria’s 40% holding in listed company Nautilus Limited gives Victoria effective control of that company, then, in turn, Victoria will have effective control over Nautilus’s 25% holding in Code company Trojan Limited. The proposed transaction will enable Pedro to accede to that control position. Accordingly, as the proposed transaction will increase from 0% to 25%, the percentage of voting rights in Trojan Limited that is controlled by Pedro, Pedro will contravene rule 6(1)(a) in relation to Trojan Limited. 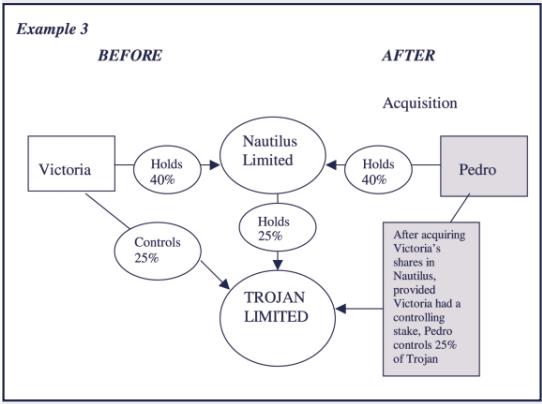 The Code is concerned with regulating changes of control of Code companies. The Code would be ineffectual if it concentrated only on voting rights held or controlled by a particular company or individual. It was essential to include in the Code the concept of “association” so that when two or more associated parties acquire ownership of, or control of, voting rights above 20% in a Code company the fundamental rule is triggered.

The concept of associates appears in fundamental rule 6(1)(a) as well as in two of the deeming provisions in rule 6(2). In all three instances, the concept serves as an anti-avoidance measure.

Associates Pedro and Quentin hold respectively 8% and 10% of the shares in Code company Trojan Limited. Pedro proposes to increase his holding by 7% to 15% through on market purchases. Pedro’s purchase will not make him the holder or controller of more than 20% in Trojan Limited. The transaction will, nevertheless, contravene rule 6(1)(a). For the purposes of the 20% threshold, Pedro’s post-transaction holding must be aggregated with the holding of associate Quentin. As the proposed transaction increases the combined holding of Pedro and Quentin from 18% to 25%, it will exceed the 20% threshold in rule 6(1)(a). Associate arrangements will also aggregate holdings in upstream companies. 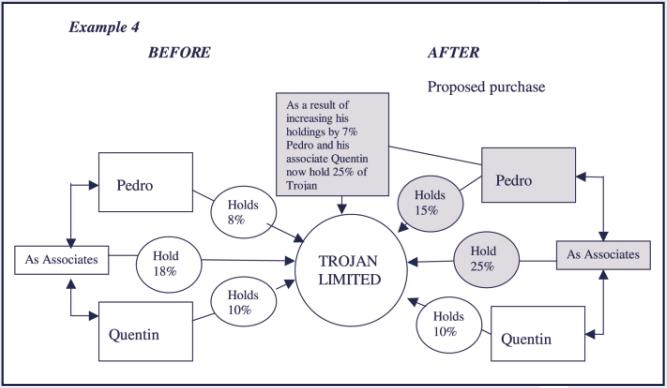 Viewed in isolation, the proposed acquisition will not cross any of the thresholds set by the fundamental rule. However, the combined holdings of Pedro, Quentin and Rodrigo give them effective control over the affairs of Nautilus Limited and thus control over the 19% holding in Trojan Limited. This control position must be aggregated with the proposed on-market 2% purchase by Pedro. As the aggregated post-transaction control position of Pedro, Quentin and Rodrigo involves more than 20% of the shares in Trojan Limited, the proposed acquisition will cause Pedro to breach rule 6(1)(a). 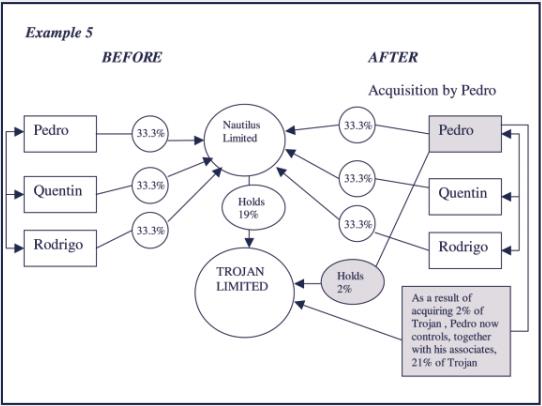 “Associate” is defined in the Code as follows:

(1) For the purposes of this Code, a person is an associate of another person if

(a) the persons are acting jointly or in concert; or

(b) the first person acts, or is accustomed to act, in accordance with the wishes of the other person; or

(c) the persons are related companies; or

(d) the persons have a business relationship, personal relationship, or an ownership relationship such that they should, under the circumstances, be regarded as associates; or

The definition of associate has two features that significantly extend the anti-avoidance scope of the fundamental rule.

First, associate status does not presuppose control of the associate’s voting rights. For instance, under rule 4(1)(a), two persons qualify as associates if they act jointly or in concert, even though neither has positive control over the actions of the other. Under rule 4(1)(b), two persons qualify as associates if the one person is accustomed to act (as opposed to required to act) in accordance with the wishes of the other

Secondly, the definition of associate is, in all five limbs, an open-ended one that turns on the facts of the particular situation. This is expressly obvious in relation to rule 4(1)(d) and rule 4(1)(e) which define associate by reference to the term itself under the circumstances. However, fact-based analysis is also anticipated by the element acting jointly or in concert in rule 4(1)(a) and by the element accustomed to act in rule 4(1)(b).

Fact-based analysis even enters into the operation of rule 4(1)(c) under which two related companies qualify as associates. Rule 3 provides that related company has the same meaning as in section 2(3) of the Companies Act l993. Under that section, two companies qualify as related if one company is the subsidiary of the other under section 5. A subsidiary relationship exists under section 5(1), if the one company controls the composition of the board of the other, which will usually depend on the circumstances of the case.

Cumulative scope of the limbs in rule 4(1)

The five limbs of the associate definition apply singularly and cumulatively. 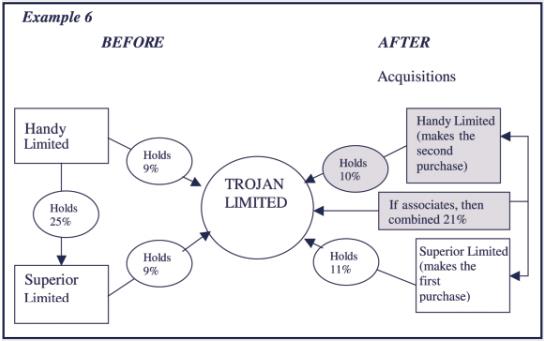 Combined effect of the control and associate elements

The combined effect of the control and associate elements, in view of their open-ended definitions, significantly expands the potential scope of the fundamental rule. 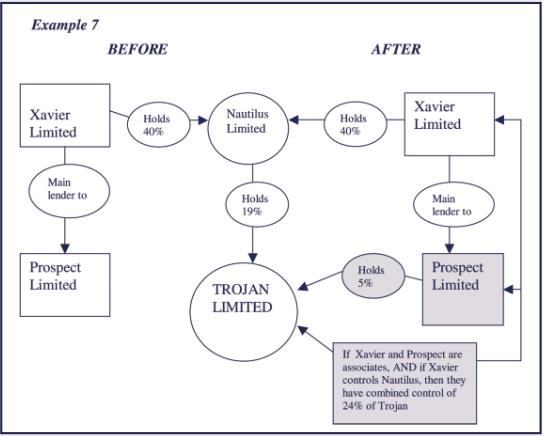