Rule 25(1) provides the offeror with broad discretion to include conditions in the offer (although self-defeating conditions are banned).

The directors of target companies are prohibited from taking any action that could effectively defeat a takeover offer. To trigger a condition of the offer, even if the directors do not intend to do anything defensive, could breach this prohibition because it would enable the offeror to withdraw its offer. This can be a problem where conditions restrict the target company from conducting its ordinary business.

This imbalance will be addressed with amendments to rule 25 of the Code to reflect the following:

(a) An offeror cannot rely on a condition of an offer that seeks to restrict the target company from undertaking activities in the ordinary course of its business during the offer period. This change will incorporate into the Code what is already standard market practice; and

(b) An offeror cannot rely on a condition of an offer unreasonably.

Clause 14(1) of Schedule 1 of the Code requires the offeror to include in the offer document a statement as to the general nature of any material changes likely to be made by the offeror in respect of the business activities of the target company and its subsidiaries.

Clause 14(1) will be replaced with a provision that requires the offeror to make more detailed disclosure of its intentions in respect of the target company. The offeror will be required to disclose its intentions regarding any material changes to the business activities, assets, and capital structure of the target company. The offeror will also be required to state that the information provided in the offer document is consistent with information given by the offeror to other regulators (such as the Overseas Investment Office or the Commerce Commission).

A statement will not be required if the offer contains a non-waivable 90% minimum acceptance condition.

Definitions of offeror and offeree (clauses 4, 17)

The definition of “offeree” will be amended to clarify that an “offeree” includes a person who holds securities in a target company that has received a takeover notice as well as a person who has formally received an offer under the Code. This will remove drafting inconsistencies in the procedural rules in Part 6 of the Code (e.g., rule 43B refers to the “offerees” who must be sent an offer document, even though those persons would not have received an offer). A corresponding amendment will also be made to the definition of “offeror” so that it includes a person who has issued a takeover notice.

A drafting change will be made to the Code to capture the possibility that the target company may provide its annual report, in accordance with its obligations under the Companies Act, and, in the case of listed companies, the NZX Listing Rules, by electronic means.

Disclosure of trading where securities held by a custodian (clause 32)

Under rule 44(3) of the Code, an offer document may be varied from the draft offer that accompanied the takeover notice to include additional classes of securities without the offeror having to obtain the prior consent of the directors of the target company in limited circumstances.

Rule 44(3) will now allow new information that becomes available about classes of securities to be included in the offer. This enables the offeror to vary its offer, and obtain an amended report from an independent adviser on the fairness of the offer, for any class or classes of securities in respect of which the offeror has obtained additional information as a result of the Code’s class notice procedure.

Status of defeating conditions and extending the offer period (clauses 14, 25)

It is a significant event in the course of a takeover offer for the offeror to obtain a sufficient level of acceptances to satisfy the minimum acceptance condition, or, similarly, if the offeror elects to waive a minimum acceptance condition. It may alter the views of the directors of the target company and of the offerees as to the merits of accepting the offer. In the Panel’s experience, such an event can occur even at the “last minute” of the offer period, which leaves the offerees with very little time to consider the effect of the change in circumstances.

To address concerns, new rules will be added to the Code to provide:

(a) The offer period will be automatically extended if the minimum acceptance condition is satisfied or waived in the period that begins seven days before the end of the offer period. The extension is for 14 days from the date that the condition is satisfied or waived. This would ensure that offerees would have enough time to consider the satisfaction of the minimum acceptance condition; and

(b) a requirement for the offeror to give notice of the status of defeating conditions at least a week before the close of the offer period. The notice will be sent to the target company, the Panel, and to the registered exchange (if the target company is listed). 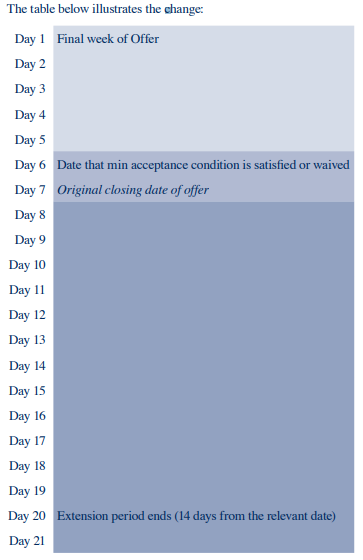